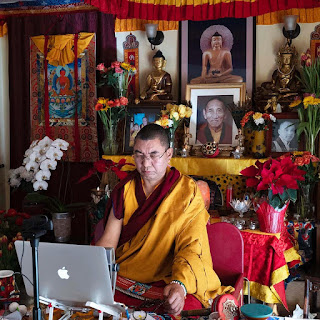 Even before the pandemic, I had been contemplating imparting oral transmissions of different practices that we hold at the Manjushri Dharma Center. Before the existence of technology, all oral transmissions were given in person, often in private. Then, as an example of a recent innovation, this past year His Holiness the Dalai Lama Himself gave an online transmission and empowerment of Avalokiteshvara through a live video. Then, seeking guidance from His Holiness the Dalai Lama, many monks and Lamas asked whether it was possible to give oral transmissions over a virtual medium such as a video or audio stream. His Holiness affirmed that it is possible to give oral transmissions using modern technology. He cited a story from Buddha Shakyamuni’s time in which a sick aspiring monk was given his vows through a written letter. He also mentioned that if Buddha Shakyamuni were alive today, His Holiness believes that He may have used technology and social media for the Dharma. What His Holiness did mention, however, was that the student must have good concentration, motivation, devotion when listening to the Teacher.

1. Description of a Transmission:

Empowerment and Transmission are unique to Vajrayana Buddhism. They are not found in the Theravada tradition, which is based on the Sutras mostly practiced in countries like Thailand, Sri Lanka and Burma, etc. It is also not found in the Mahayana practices of Buddhism in countries like China, Korea, Japan, Vietnam, Singapore, Malaysia, etc. However in the Vajrayana Buddhism practiced in countries such as Bhutan, Mongolia, Tibet and the Himalayan regions, it becomes imperative to receive these transmissions in order to be able to engage with the practice of the Yidam, or Deity. Before the accomplishment of any Yidam deity practice, it is a basic requirement to receive the three transmissions, namely Empowerment, Transmission, and Instructions, from the Teacher. The minimal requirement to engage in such practice is to receive the oral transmissions. In higher Tantrayanas, one must receive all three: the empowerment, transmission and instruction. I will not describe all three in depth here.

During the Buddha’s time, all transmissions were given in person. However, in this modern time when the Buddhist teachings are flourishing in different countries with different cultures at a different time, as I mentioned before, His Holiness the Dalai Lama has said that the oral transmissions and also the empowerments could be given via an online medium. With this in mind, I decided to give the oral transmissions of my own practices online.
Luung is the Tibetan word for transmission. Ka Trol wa in Tibetan has the connotation of receiving permission to practice the teachings. Therefore, when involved with such practices as the Yidam deity, having received the Luung means having received the permission to engage in that particular practice. In the past in Tibet, it was customary for a teacher to confer the transmission, empowerment and instructions to a student only if the student had favorable qualities of practicing the teaching and if it was beneficial to the student. I feel that the transmission, or Luung, can be delivered online, however, I do have reservations on giving the Empowerment and Instructions online. Therefore I will not be giving these online.

As an example, Namchoe Migyur Dorjee at 13 years old would have daily visions of Guru Padmasambhava, Buddha Amitabha, and Avalokiteshwara. Each day he would receive manifestations of the Dharmakaya, Nirmanakaya, Sambhogakaya and speak to them as if speaking to another person. For instance, the Dechen Monlam prayer “Ngo Tsar Sangye Nawa Thaye..” is an actual practice that Namchoe Migyur Dorjee received directly from Amitabha Buddha. We may think that it must have been written by someone but it is actually the direct words of Amitabha Buddha to humans. This kind of transmission is an extremely direct and potent lineage filled with great blessings. Hence, if one is able to receive such a transmission, it carries great benefit and blessing for the practice. In Tibetan this is called Luung Gi Gyupa, meaning once the Lama has established conviction in the unbroken authentic lineage of the transmission then it is given to the student.

3. Characteristic of the Teacher giving Transmission:

What qualities does the Teacher giving the transmission have? The Teacher at the very least must be well-versed in reciting the practices associated with that Luung. With the Tantrayana practice the Teacher must also be someone who has done rigorous practice, completed retreats and who possesses experiential knowledge through contemplation and meditation. As an example, during a 3-year retreat, one’s practice is to epitomize the depth, power and precision of that practice and to awaken pure perception of this world as a sacred realm. The highest level of teaching is someone who is accomplished in the Samaya of the secret Mantrayana, having the vows of Pratimoksha on the outside and the Bodhisattva vows on the inside, as well as being highly experienced in the Kyey Rim and Dzog Rim. So, all this is immensely important in a Teacher.

4. How must a student receive Transmission:

One who receives the transmission must visualize the Teacher as a manifestation of Vajradhara, or Dorjee Chang in Tibetan. All lineages transcend from the Vajra Holder. As one sits to receive the transmission, one must listen with acute attention and generate the motivation to engage in the practice of the teachings in the future for the benefit of all sentient beings. The most important part is not to break the sound continuity. It does not matter whether it is in a different language. When I recite the Luung in Tibetan (as I have received it in Tibetan), it does not matter whether one understands or not but the important part is to hear the sound. One must visualize oneself as a deity, be it Tara or Avalokiteshwara. Visualize each of your two ears as being an eight-petaled lotus flower. The stems then travel down through your neck and into your heart to form an eight-petaled lotus upon which is the yellow Tibetan word Dhi seated on a sun and moon disc. As the Teacher recites the Luung, visualize the words and sounds emanating as body, speech and mind blessings being transmitted from this lotus flower into your heart. The words from the Teacher, in the form of Ali and Kali blessings, gently flow into oneself and dissolve into your heart thereby receiving the transmission of body, speech and mind.

6. The disadvantages of not receiving Transmission:

Without transmission, you cannot practice and you will not realize the benefits of the three higher level practices, namely, Mahayoga, Anuyoga and Atiyoga. As an example, Marpa Lotsawa gave Milarepa a very difficult time. He did not give him any teaching for many years and subjected him to hard labor. A person unfamiliar with the teachings of Buddha may see Marpa as a cruel person and have sympathy towards Milarepa, but it is actually the contrary. Marpa loved no one more than Milarepa, however, his means to teach Milarepa was by eliminating the bad karma Milarepa accumulated as a result of killing people in the storm conjured by him as a vengeful act against his uncle and aunt. One must purify all bad karma first and only then will one be able to practice and see benefits of one’s practice. Seeing this, Marpa's wife, Yum Damepa was extremely sympathetic towards Milarepa. With her advice, she and Milarepa wrote a letter on behalf of Marpa Lotsawa, packed some special offerings and sent Milarepa to Ngogtung Chotor to request some teachings. Ngogtung Chotor was Marpa Lotsawa’s student and when Ngogtung Chotor saw the letter, he agreed to give teachings to Milarepa and asked him to sit with the other students. When Milarepa received transmissions, instructions and empowerment from Ngogtung Chotor, Milarepa did not receive any blessings from the teachings and Milarepa did not experience any transformation in his heart. All the other students of Ngogtung Chotor experienced many changes in their practice and realization. When asked why Milarepa did not experience any apparent changes to his heart from his practices when other students were seeing noticeable transformations, Milarepa then told the truth that he had forged a letter from his Teacher Marpa Lotsawa. At that, Ngogtung Chotor said that it is because he had not received any blessings from his Teacher and that was the reason he did not see any change in his practice or his experience. He said that this was not correct and that the Teacher’s Ka Luung is extremely important; hence, the Teacher’s transmission becomes extremely important. Ka and Luung are understood as permission from the Teacher. It is merely the permission given by the Teacher to the student, whatever the practice be. Therefore, in Vajrayana Buddhism, without transmission, one is unable to receive the blessings of any practice, especially that of higher yoga tantras. That is the disadvantage of not receiving a transmission. As a metaphor, even if one presses a handful of sand and continues to persistently do so, no oil will come off it. Similarly, without transmission from a qualified Teacher, there will be no result.

Sometime ago, when I asked my students what they will practice, they replied, “just go to Lotsawahouse.org, it has everything.” Or some have said to me, “I found this from Lotsawahouse.org, please recite this; I want to practice this.” These days it is easy because everything is on Google and it is simply a matter of downloading texts and explanations. I have replied that first, I do not know all that is on Google, secondly, all of Buddhist practices are on Google, especially in the West, all the highest tantric teachings are on Google, and that I do not have transmissions, instructions and empowerment on such teachings. Buddha’s teachings are expansive. The Sutras have 84,000 teachings of Buddha and there are even more in the secret Vajrayana teachings. Therefore, everything that is uploaded on the internet that one can see and find interesting cannot be easily practiced. Practice is done with the aim of transforming and purifying our minds and hearts; through this process, once we begin to clear away our delusions and ignorance, we can experience the essence of emptiness. This experience allows us to see the truth and the nature of reality as it is which eventually leads to the freedom from the suffering of this cyclic existence; that is the ultimate purpose of the practice. So, in order to do so, it is very important that that practice come from an extremely reliable source that is pure and has an unbroken lineage.

I, Khenpo Karten Rinpoche, dictated this message in April of 2021 after giving a series of oral transmissions to my students over an online video platform. This blog was translated and transcribed by Dechen Paltso, through a series of conversations and audio recorded messages, and further edited by student, Karma Choeying.