Why it is so important to teach the Tibetan people

I want to write a bit about why it is so important for me to continue to teach the Dharma to Tibetans in diaspora and the importance of preserving Tibetan culture amongst Tibetan youth: 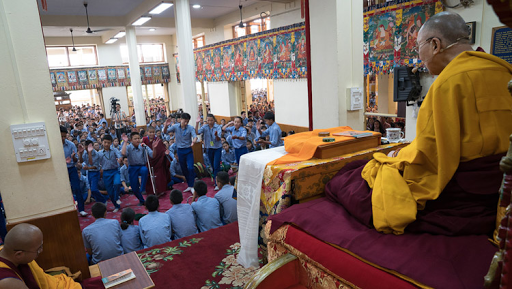 Since last year, we have all been challenged with the impossibility of physically meeting with one another. At first, as a Dharma teacher, I thought that I would be unable to give teachings for an extended period of time if the lockdown persisted. However, amazingly, online platforms became quite popular, and platforms such as Zoom and Facebook Live ushered in the great possibility to reach not only to my local students but also those around the world. Later on, I was able to connect to more students than I was ever able to reach when the Dharma Center was open. I am able to now reach and benefit more people across the globe.

Here in Pacific Grove, there are just a handful of Tibetan people. In the past several years, I have taught my Sangha all that I know through weekly prayers, inviting guest Teachers, semiannual retreats, writings such as my books and blogs, and oral teachings with the presence of a translator, specifically through the teachings on the Thargyen, or “The Jewel Ornament of Liberation'' by Gampopa Sönam Rinchen. Accordingly, now if they really want to practice seriously, they have all of the means to do so. I have imparted much of my knowledge over the past 10 years. As I often say, the Buddha is the doctor, I am a nurse, and the Dharma is the medicine. Without making full use of the medicine, it will not be of much use. Therefore, practice; if one seriously practices the methods that have been given, these should be sufficient in themselves.

I’d like to briefly share my motive for teaching overseas. When I came to India in 1997, I was fortunate to have a private audience with His Holiness the Dalai Lama. I inquired about building a monastery, to which His Holiness responded that there were already many monasteries. His Holiness then said that if I were to engage in some form of work that directly impacted people’s well being, it would be beneficial and through it I would accumulate merit as well.

One of His Holiness the Dalai Lama’s advice to me was to teach Dharma to non-Tibetans, but he also emphasized that teaching Tibetans is very important. When I asked him what I should do, he told me that nowadays there are many Tibetans settled in India and various parts of the world, and that it would be beneficial if I could help them through teaching the Dharma.

In the meetings that I’ve had with His Holiness, he really emphasizes and focuses on the Tibetan people and Tibetan culture: Tibetan Buddhism, language, customs, traditions, and heritage. One of his great commitments in life is to the Tibetan people. This is the Third of “The Principal Commitments of His Holiness the Dalai Lama”:

Accordingly, I organized the Dechen Shingdrup, Amitabha Prayer for the Accomplishment of Sukhavati, group in Kollegal in South India, and started to teach in other Tibetan settlements in India. In the United States, I have been giving teachings to the Tibetan community in Portland, Oregon. I think His Holiness’ advice is profound in that if the Dharma, which is the essence of Tibetan culture, can be preserved by Tibetans, it will foster the existence of Buddha Dharma in the future and will be of great benefit to the rest of the world. If a root is left unprotected, the branches, leaves, and flowers will die; similarly, if Buddha Dharma, the root of the culture and traditions of Tibet, is not preserved, then everything will be lost. Therefore, His Holiness makes enormous efforts in this direction to benefit not only the Tibetans but the entire world. If this precious tradition that is universally revered is to endure, Tibetans must take the responsibility to preserve it.

For many years, some South Asian countries such as India, Nepal, Pakistan, Bangladesh, and Indonesia practiced the Buddha’s teachings; later though, due to various invasions and influences of other religions, the presence of Buddhism in these regions declined and in some regions almost completely disappeared. Today, many new generations living in these regions genuinely regret the decline of Buddhism and wish that it had been preserved. As Buddhism has diminished in modern day India, which is the birthplace of Buddhism, it has been one of His Holiness’ four principal commitments to revive the awareness of the value of ancient Indian knowledge amongst young Indians. It is being undertaken today as young Indians are pursuing the practices to higher levels and impacting the lives of many. Like in India, if we lose the teachings of the Buddha in Tibet, it will be a great loss. From now on, if we teach and succeed in passing on the teachings to the next generation and so on, then it will remain to eternity. If we lose it now, there will be nothing to be passed on, and within two or three generations, everything will be completely lost. This is why His Holiness has emphasized that Dharma teachers give teachings to Tibetans so that the teachings are preserved and will pave the way for individuals with potential to become teachers in the future which has the potential to benefit the rest of the world. That is one of the reasons why I am intent on giving teachings to Tibetan students.

Personally, I feel strongly about this because I have observed a noticeable difference between the Tibetan youth living inside Tibet and those living overseas in the Tibetan diaspora. Externally, all three groups are the same: they were born to Tibetan parents, they look similar, etc., but, when juxtaposed, I have noticed large disparities not only with their language proficiency, but also with understanding of culture, knowledge of scriptures, and outlook. In general, even with efforts to suppress Tibetan culture and language by the Chinese government, young Tibetans residing in Tibet outshine their counterparts born in India or Nepal. Moreover, young Tibetans in South Asian countries such as India and Nepal have a relatively better grasp of Dharma and other customs when compared to Tibetan youth in Western countries such as America and in Europe. Actually, as I have seen, the knowledge of Dharma in young American Tibetans is quite lamentable. As an example, every year I go to Portland, Oregon, with my students and we visit with other Lamas and their respective Sanghas. One Lama commented saying, “Rinpoche, your Sangha is quite old! Where are your young students?” This is true, and his statement made me a bit sad. In places such as the United States, we are very fortunate to have many freedoms, but Tibetans must not forget their heritage, otherwise, we risk losing everything.

Families and parents must encourage their children to embrace their Tibetan roots. Despite the best efforts on the part of parents and teachers to preserve the Tibetan language and culture, the challenge is immense and it is very distressing. We are at a crossroads and a critical moment. What would a parent deprived of his or her own culture and traditions offer to their own children? As in an earlier analogy, if the root is dry, there is no hope for a tree; similarly, if the source of water itself is dry, how can one expect water downstream? This is why I give Dharma teachings to Tibetans these days.

Tibetans must realize that His Holiness is older and that throughout his life, he has given everything to us. He can be likened to a parent caring for orphans: those Tibetans living outside of Tibet. His strength and guidance was the only hope in the darkest period in Tibetan refugees’ lives, so spiritually he is our Root Guru and a temporal leader tending us all with great compassion. I too consider myself as a follower of his guidance. Irrespective of my failings, I try to follow his advice and path at all times. We may not make great representatives of his words and actions, but we can still aspire to do the best we can in every possible way. Emphasizing the great responsibility they have, His Holiness often mentions to the monastic institutions in India that if Tibetan and the Himalayan communities succeed in preserving the Dharma, he will not regret leaving this world. Otherwise, departing from the world after being unable to return to Tibet coupled with a failure to preserve Tibetan culture and tradition would be very hard for him. I always keep His Holiness’ advice in mind and do my best to preserve the Dharma.

Inside Tibet, there is no freedom to practice Dharma and Tibetans are unwillingly forced to abandon their own culture and traditions. If we become complacent and ignore what is truly important, that is very unfortunate. The Tibetans inside Tibet are living with the hope that His Holiness and other great masters continue to operate outside of Tibet, that there is a Central Tibetan Administration, and that eventually all the Tibetans outside of Tibet will one day work to rebuild the nation of Tibet. Such is their hope and we must be ready to fulfill that expectation. Wherever we are, we must exemplify His Holiness the Dalai Lama’s principles by spreading the goodness of human nature.

I, Khenpo Karten Rinpoche, dictated this message in May of 2021. This blog was translated and transcribed by Dechen Baltso, through a series of conversations and audio recorded messages, and further edited by my student, Karma Choeying.